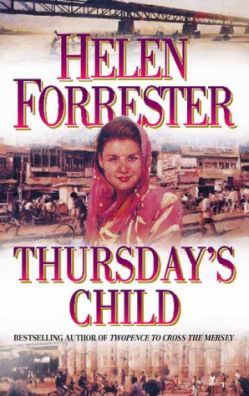 Peggy Delaney was a Lancashire girl born and bred, beginning to live again after the heartache of the war. Ajit Singh was a charming young Indian student, shortly to return to his homeland and an arranged marriage. When Peggy and Ajit fell in love, each one knew the future would not be easy. But as they began their new life, far from their homes and their families, they found that love could bring two worlds together.

The love story of an Indian man and English woman has some parallels to Helen’s own life but this is a novel. Passage Across the Mersey tells the teal-life story. Readers can compare the two.

Thursday’s Child was Helen Forrester’s first book originally published as Alien There is None under the pseudonym J. Rana. Here are Helen’s comments about the re-issue of the book with a new title.

“My first book was written in 1959, when for the first time in my life, I had a little leisure – my only child had begun school! I have always worked, so I did not have any hobbies to speak of. Furthermore, I was new to Western Canada and did not have a circle of friends. So I decided to write a book. At that time books on Indian life (the real life, not the British life there) were very rare, so I wrote about my very happy life there as a nearly Indian housewife. I took its title, Alien There is None from the work of an Indian poet (when I know thee then alien there is none and no door is shut).

“Feeling very daring, I sent it to a London publisher, Hodder and Stoughton, who took it – to my great surprise. The book is still in print, but its title had to be changed, because the meaning of the word “alien” has altered. It meant originally, of course, “foreign”. Now it means an inhabitant of outer space.So the book is now available as Thursday’s Child, the new title being taken from the old nursery rhyme (Mondays child is fair of face, Tuesdays Child is full of grace, etc) that a child born on a Thursday as a lot of travelling to do.” 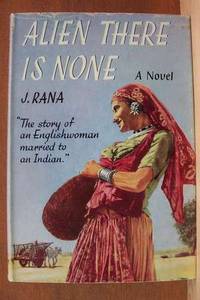 Above: The original 1959 edition of Thursday’s Child