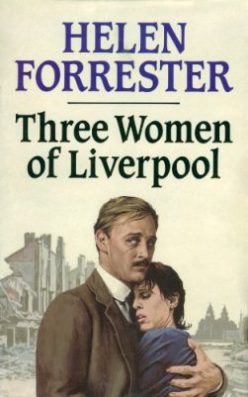 Liverpool, May 1941. The worst week of the Blitz. Helen Forrester produces another moving novel set on Merseyside.

An extraordinary story of three brave women, Ellen, Gwen and Emmie, each trying in her own way to deal with the brutal tide of destruction brought on by the air raids of the Second World War.

Order Three Women of Liverpool today from Amazon.ca or Amazon.co.uk.

There is Ellen whose home is destroyed by bombs; Gwen, whose family absorbs all her time and energy; and Emmie, whose only fears are for the safety of her merchant seaman fiancé, far away in the South Atlantic. None of them were prepared for what would follow, when the air raid siren sounded for the first time on 1 May, 1941.

The terrible bombing of Liverpool had an indelible effect on Helen and she found inspiration in the bravery and steadfastness of ordinary people trying to survive and carry on with life.

Helen wrote to another author about this book. “In 1984 I published a novel called Three Women of Liverpool, because I felt that little had been written about civilian women under fire. I’ve used the May Blitz as background. The only liberty I took with the history of the raid as far as it was known at the time, was to transfer an incident at Sir Thomas White Gardens, Kirkdale, to Toxteth, and to create a small sailor’s canteen on Paradise Street.

“Up until March 1941, I was a social worker in Bootle and, even before the May Blitz, our area was already in a real mess from heavy bombing. In the last week of March, I obtained better paying work at Dingle bank Installation. I remember Mr Tyler falling into the river, and also the ends of our oil pipes being blown off and my being absolutely terrified of its consequences. We dare not even boil a kettle on the installation for three days. A quiet employee of the installation won the George Medal for climbing onto the top of a full, huge take of petrol and heaving of its floating roof a collection of incendiary bombs. By this brave deed, he saved streets of little houses running off Grafton Street from being decimated. I am ashamed that I cannot, for the life of me, remember his name. 50 years is a long time!

“I was interested that you query the exactitude of the casualties. Not everybody was killed so neatly and quickly as the casualty lists suggest; they died later, sometimes of secondary infections. And in the dock area there are always a certain number of people, e.g. seamen from other countries waiting for a ship and so forth, prostitutes from other towns who came when there were more ships than usual in port, who were, I am sure, last. Even in death, there was a kind of snobbery, where people who seemed of no import were not given much attention, particularly if a body was rather broken up were battered and if nobody inquired for them.”

Once again the background and setting for this book were based on deeply personal experience while the characters are fictional. Helen wrote to a very old friend. “You have probably discovered Three Women of Liverpool by now. It was on the Times bestseller list at the beginning of the month, and both it and Liverpool Daisy are on the Guardian’s 100 best-selling paperbacks list this month. If I had known, when I was going through my own particular hells, that one day I would make a living out of it, I would have borne it all with considerably more fortitude!

“I still light candles for the souls of men I dearly loved, whenever I go into a foreign cathedral. One dear man lies beneath the Atlantic and one is buried at Fontenay-Le-Pesnel in Normandy. I also lost my best woman friend, exactly as Ellen in Three Women of Liverpool lost her life; I do not forget her either.”