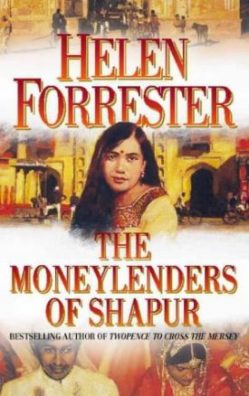 Lovely Anasuyabehn had been brought up to obey her loving father but as soon as she set eyes on Tilak, the brilliant new professor at Shahpur University, she knew she could not marry Mahadev, the wealthy moneylender selected to be her husband. Torn between passionate love and a deep religious belief, Anasuyabehn longed to follow her heart what she did not know was how much both men wanted her.

Order The Moneylenders of Shahpur today from Amazon.ca or Amazon.co.uk.

The setting for this novel is rooted in Helen’s experience of living in Ahmedabad immediately after her marriage in 1950.

Helen and her new husband lived on the outskirts of Ahmedabad near the newly developed university. The city had had a very active role in the Indian independence movement and was much less directly influenced by the British presence in Indian than Mumbai or Delhi for example.

Helen was warmly accepted in the university community. More interestingly she was able to develop a connection with women from the local villages and other passersby. She was fascinated by Indian culture and customs and was determined to fit in as best she could thinking that she might well spend the rest of her life in India.

As it turned out they only lived there for two years but that was long enough for her to develop the foundation for the rich setting and characters of The Moneylenders of Shahpur.