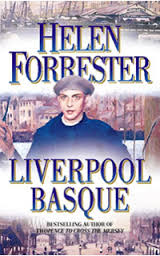 In the early years of this century, many Basques left their homeland in the Pyrenees, between France and Spain, to seek a better life in the New World. Most passed through the great port of Liverpool on their way. The family of little Manuel Echaniz stayed. The Liverpool Basque is the story of Manuel’s childhood and coming of age in the teeming streets of the Mersey docklands. It is a story of poverty, comradeship, hardship and generosity.

Brought up by women while the men are at sea, Manuel grows up with a fierce pride in his heritage and a powerful will to survive in an era of deprivation and unemployment. Against all odds, he gets himself an education of sorts and sets off on the long voyage of his life.

The inspiration for Manuel was a Basque gentleman who wrote to Helen after reading another of her books. Vincent Elordieta had been a member of Liverpool’s Basque community and wrote to share his history of Spanish people in Liverpool and his wartime experiences. His story was compelling and had connections to Helen’s own experiences.

In addition to reading his own autobiography, she met with him several times and developed a strong appreciation for a small minority group in Liverpool. She was able to enrich the detail in the book by probing him on numerous details of Basque life in Liverpool such as what his mother liked to cook for everyday meals and for special occasions such as Christmas and what spices she used, whether he got into fights as a boy because of his different background, who managed the money in their household and where they worshipped.  All of it was fodder for Liverpool Basque.